Cal Ripken, Jr., and his brother Billy teach baseball fundamentals in a style they call “The Ripken Way”. This is the book behind the style.

There are dozens of books on the “basics” of baseball playing, but few are authored by someone with the cachet of Cal Ripken, Jr. After reading it from cover to cover (twice), I also have to state that few other books on the fundamentals are as clear, correct, and, most importantly, applicable to nearly every ballplayer — regardless of age or skill level.

Ironically, the one thing that separates this book from the rest is the creed delivered by Cal Jr., which happens to go against the title: there is no “one way” to play baseball — at least as far as a player’s style. The “Ripken Way” is actually a more general view of playing baseball: play hard and with passion, practice well, have an idea, and respect the game. At the same time, the “Ripken Way” has little to do with forcing a specific technique. Rather, as Cal states, a large part of the “Ripken Way” of coaching is “to celebrate the individual” — in other words, the ends justify the means, or, put another way, as long as the fundamentals are being executed, and the result is success, let the athlete continue to do what he’s doing, even if it looks unusual or “incorrect”.

This idea goes against many parents and coaches today who feel there is only one right way to accomplish a specific task. I’m not sure when it started, but at some point the baseball “guru” came out of nowhere, professing the single best way to hit or throw a baseball (interestingly, I’ve yet to hear about a fielding guru). If you’ve spent any time researching baseball techniques and mechanics on the internet, you’ve no doubt run into these self-appointed demigods of baseball. They claim to have spent hundreds of hours studying high-speed film, biomechanics, kinetics, etc., and as a result have found the one best way for a human being to throw or hit. You can buy their book or DVD of “secrets” for $399, or you can try to get into their sold-out clinics for a price higher than that.

In a perfect world, dealing with perfect human bodies, these theories might be correct. However, we live in an imperfect world, and most of our bodies are equally imperfect. If nothing else, every “body” is different, and as a result one way of execution that works for one person may not necessarily work for another. All one needs to do is look at video of Barry Bonds, Ichiro Suzuki, and Pete Rose to know that highly successful hitters can be very different in their styles. The Ripken Way celebrates these differences, and encourages them, with the idea that the differences are what make baseball such an interesting game.

Though “Play Baseball the Ripken Way” does not demand absolutes, it does offer the fundamentals that are common among successful, professional ballplayers — and this is the real meat and potatoes of the book. Cal and brother Billy Ripken fully explain, and demonstrate (with photos), the proper way to field a ground ball, throw a baseball, and swing a bat. Where there are several techniques to accomplish the same task, the Ripkens explain all the ways, who does them, and why. That’s something you don’t always see in the other books — an explanation. The Ripkens tell you the best way to field a ground ball is to have a wide base and your butt down, then explain why (because it pushes your hands out in front of your body, an easy position to field a grounder).

For any coach looking to grasp an understanding of fielding and hitting fundamentals, this book can be your bible. The only part of the book that falls down is the chapter on catching, which promotes old techniques that aren’t fully explained. It’s interesting, but expected, since former catcher Cal Sr. passed long before this book was published, and the person who provided the bulk of the catching info was Mark Parent — a fine catcher in his day but one who relied on illogical “old school” mechanics. (Ironic, isn’t it, that I bill this as an “old school” site yet denounce “old school” catching? I digress …) I’d be more open to the catching chapter if it wasn’t so abruptly dissimilar from the rest of the book, which provides logical explanations behind all described techniques. Even the pitching chapter has plenty of useful information and background info vital to a coach or young pitcher.

Despite my distaste for the catching chapter, I recommend this book to catchers, because it provides a comprehensive overview of what everyone on the field should be doing. The catcher is the field general and part of his responsibility is knowing how his troops are supposed to react to the ball and execute. The more a catcher educates himself about the game, the better prepared he will be to confidently lead a team.

In the end, this book provides the fundamentals of baseball that every coach and player needs to know, and in an easy-to-understand context. If you’ll pardon the pun, it “covers all the bases”, explaining the whys of technique and the hows of manning each specific position — making the teaching of baseball that much easier. The book also offers insight on how to approach and prepare for a game, what to think about during a game, and other mental nuggets. All in all, a fine book that deserves to be on the shelf of every baseball coach and serious ballplayer.

If you’re interested in purchasing, click on the picture of the book to get it from Amazon. A tiny portion of the purchase price goes toward the upkeep of this site. Thanks. 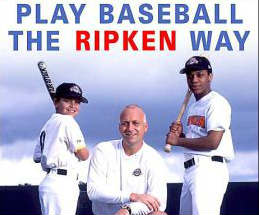 Play Baseball The Ripken Way
Buy this item
Cal Ripken, Jr., and his brother Billy teach baseball fundamentals in a style they call "The Ripken Way". This is the book behind the style. There are dozens of books on the "basics" of baseball playing, but few are authored by someone with the cachet of Cal Ripken, Jr. After reading it from cover to cover (twice), I also have to state that few other books on the fundamentals are as clear, correct, and, most importantly, applicable to nearly every ballplayer --- regardless of age or skill ...
7.5 Total Score
Good

User Rating: Be the first one!
Joe Janish
tweet