Why Johan Santana May Not Return in 2011

Mets pitcher Johan Santana suffered a setback while rehabbing his injured shoulder. It may be a long time before he can return to the mound, unless he corrects the mechanical flaw that caused his injury in the first place.

NOTE: This is re-posted from MetsToday.com

A few days ago, in the comments section, I said this:

I wouldnâ€™t be so quick to count on Johanâ€™s return. If his recent bullpen session is any indication, his mechanics are still flawed and heâ€™ll be re-injuring his shoulder sooner rather than later.

Usually, it feels good to be “right” about something. In this case, however, it doesn’t feel so good at all, after hearing the news that Johan Santana has had a setback and will be examined by doctors in New York tomorrow for “lingering discomfort” in his left shoulder.

Granted, setbacks occur all the time — and in fact are expected — during the rehabilitation process, particularly after a major surgery such as the one Johan received. But what bothers me is that his shoulder injury most likely occurred because of a flaw in his mechanics that began to become a habit at some point since he joined the Mets (or possibly just prior). The flaw was identified by our friend the Sport Kinesiologist Angel Borrelli last year — prior to Santana’s injury. When SNY and MetsBlog posted video of Johan’s bullpen session and recent rehab start in St. Lucie, I saw some things that didn’t look quite right to me and consulted with Angel — after all, I’m just a pitching coach and not a scientist, and therefore not qualified to evaluate the motion of the human body. Angel looked at the footage and agreed that there were some inconsistencies with Johan’s delivery — both from pitch to pitch in the rehab assignment and also in comparison to what she has seen from Johan in the past (Angel has been studying Santana’s delivery going back to his Minnesota years, because he previously did many things correctly and efficiently; his motion was a model for other pitchers to follow). Unfortunately, Angel confirmed that the flaw has not been corrected. Here is her analysis:

Take a look at the photos of him below (the first is from 2008, the second is from a week ago). In the first photo, even though I can’t see his feet, because of how level his belt-line looks, I think his front foot has landed…which means that his pitching arm has excessive internal rotation for the phase of the motion in which he is in. This means stress at the level of the shoulder. It would also reduce his velocity big time.

In the second and most recent photo, it shows the same problem — but worse. He not only still has excessive internal rotation, but because the elbow is so much higher than the shoulder, he is now running the risk of supraspinatus impingement. In fact, this is probably what is causing the shoulder discomfort.

Because I have seen so many variations of his pitching arm, I am thinking that his mechanics are inconsistent because he is in pain. It is obvious that he has not been given a clear directive of what he needs to do to resolve this issue and return to his former greatness. 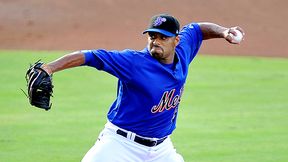 So in other words, Johan’s flaw has not been corrected. I wouldn’t be surprised if it hasn’t even been identified. Part of this ignorance could be due to a common thought process throughout baseball with experienced superstars: Johan Santana “knows himself” and his body better than anyone, so there is a tendency to leave him alone. However, if someone doesn’t step in and help Johan make this correction, he will continue to damage his shoulder, continue to experience pain, and likely will be unable to return to the mound this year. In fact, there’s a possibility he won’t ever return to Major League form if he doesn’t get his mechanics fixed.

Some day — hopefully soon — MLB teams are going to recognize the reality that pitching coaches need help from qualified scientists in understanding and evaluating pitchers’ motions. It doesn’t mean teams don’t need pitching coaches, nor that a scientist should replace the coach. To the contrary — it should be understood that pitching a baseball is a complicated, often dangerous activity, and there are resources available that can minimize the risks and keep pitchers healthy and performing at their peak ability.

What is really sad to me…this could have been a simple fix if someone had responded to his change in performance (a decrease in velocity) as a sign that something was wrong with this previously fantastic pitcher. The performance was giving the clues, the mechanics would have explained the problem, and a solution could have been easily had by his making a tiny adjustment.

It’s sad to me too. What makes this all the more sad is that Johan is only one of many, many pitchers — professional and amateur — who are not being properly evaluated and educated. It doesn’t have to be that way.

Back Buster Posey Aftermath: What Should Be Done?
Next Swinging on 3-0 Counts
Related Articles
4 Comments