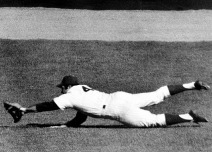 Former Miracle Met Ron Swoboda chats about the techniques and approach he developed while making himself into a Major League outfielder in the most recent baseball conversation.

Many of you may remember, or have seen the highlight of, “the catch” made by Swoboda against the Baltimore Orioles in the 1969 World Series. What you may not know is Ron was a converted infielder who struggled with the outfield in his early days as a pro. However, with hard work and dedication, he transformed himself into an everyday MLB outfielder and the man who made one of the most legendary snares in New York baseball history.

Special thanks to MintPros for arranging this conversation.

By the way, you can purchase a framed and autographed photo of “The Catch” through the Daily News (a great holiday gift idea!). It is a limited edition commemorating the 40th anniversary of the event and the Mets’ first World Series win. A portion of the proceeds go to the Mets Foundation, which funds and promotes educational, social, and athletic programs, as well as other charitable causes.

The conversation with Ron Swoboda can be heard below, and you can also subscribe to the OnBaseball.com podcast feed through iTunes.