Will Johan Santana Return in 2014?

According to various reports and rumors swirling about the baseball blogosphere, Johan Santana is throwing this winter with an eye toward returning to the mound in 2014.

Though the Mets declined a $25M option to keep him another year, the team didn’t close the door on signing him to a much less expensive deal for next season. There also has been some banter that a reunion between Santana and the Minnesota Twins is a possibility. With pitching a priority for every MLB club not based in St. Louis, some team, somewhere, almost assuredly will take a flyer on Santana. I get the feeling he’s going to look for a one-year flyer at somewhere between $6M and $10M. Will he be worth the gamble?

My gut says no, as do my eyes. The reason Johan Santana required surgery to repair his shoulder earlier in 2013 is the same reason he required surgery in 2010 — he had a dangerous flaw in his pitching mechanics that put undue, significant stress on both his elbow and shoulder. This flaw was identified by scientist Angel Borrelli about a year before his injury occurred, and it could have been corrected. When Santana returned from his first surgery, he went right back to the exact same mechanics that caused the injury, and this was considered a good thing by the “experts.” Who were those “experts?” The Mets coaching staff, including pitching coach Dan Warthen and manager Terry Collins. Warthen, according to The New York Post, said this:

“I’ve been looking at video from when he’s been down here recently and comparing it to video from 2008, before he got hurt,” Warthen told The Post outside the team’s spring training complex yesterday. “It’s no different. Not even one percent. That’s extremely important.”

I don’t mean to throw Warthen under the bus — quite the opposite, actually. At some point — and hopefully very soon — Major League Baseball teams will stop putting the responsibility of pitching mechanics on the shoulders (pardon the pun) of pitching coaches, and instead turn to scientists who practice qualitative analysis. We’ll get into that further on another day, but in the meantime, let’s focus on Johan Santana.

If Santana hasn’t yet figured out that it was his throwing motion that caused his shoulder to tear twice, and hasn’t made the necessary correction, then his shoulder (and possibly his elbow) should be expected to fail sooner rather than later. By the way, this correction would not be a massive change to his delivery, and wouldn’t make him any less effective — he pitched without the flaw most of the time during his years in Minnesota. At some point while still with the Twins, for whatever reason — perhaps fatigue, perhaps trying something different, perhaps feeling soreness somewhere — Santana’s throwing hand would “cock” toward his ear and stay there for too long a time. The action is much like catchers are taught to throw (God knows why?); it is also called “short-arming” by baseball people. It looks like this: 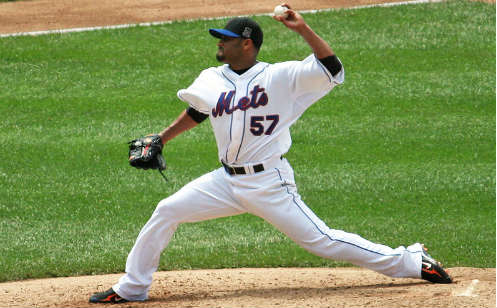 As the months and years went by, Santana’s left hand got closer and closer to his ear, and the flaw occurred more frequently, until eventually it was ingrained in his everyday mechanics. By cocking his hand at the point in the motion when he was cocking it (timing is critical), he was in effect preventing his shoulder from fully rotating. Ironically, this results in damaging the shoulder. Because the shoulder isn’t rotating, the bicep and elbow work harder, with the bicep pulling — think of a rubber band being pulled. And guess what? The bicep is connected to the shoulder (remember that song about “dem bones?” the muscles and ligaments are similarly related), so when the bicep is pulling, it’s also pulling on the shoulder — in a harmful way. I’ve dumbed it down quite a bit, as this piece is about projecting Santana’s injury risk rather than teaching you about anatomy and human kinetics. The gist of it is this: if the flaw has not been corrected, then Santana’s shoulder will not be rotating, and he likely will hurt himself yet again.

Additionally, Santana will not be able to throw at the same velocity (92-94) as he did prior to his first shoulder surgery. Without the shoulder involved in the throwing motion, it will be difficult for him to even throw as high as 90 on a consistent basis. Instead, you’ll see radar gun readings in the 85-87 range — much as was seen in 2012. On the one hand, Santana threw a no-hitter that year; on the other hand, it was also statistically his worst year since becoming a MLB starting pitcher — his ERA was 4.85 and his WHIP, 1.33. Those aren’t awful numbers, but certainly, they are not the numbers worthy of, say, $10M a year. If he was a lock to put up stats like that over 200 innings, maybe. Surely, someone will point out that Santana struck out 8.5 batters per 9 innings that year, using that stat as support that he still has “swing and miss” potential. Maybe so, but I’d also point out his career-high of 3 walks per nine innings. Where did that come from? Throwing more pitches out of the strike zone, in an attempt to get those missed swings? Possibly. Could it also have been due to a sheer lack of control — which might be related to an elbow issue? Generally speaking, a sudden drop in command is often related to pain and/or weakness in the elbow and/or forearm — because those are the ligaments and muscles that control the fingers (there’s that song again). Independent of release point, how a ball is controlled is due to finger placement and pressure.

Another thing to consider: Santana’s “out pitch” is his change-up, and his next-best pitch is a slider. The success of both pitches are directly dependent on fastball velocity. I would argue that his slider is nearly useless if his velocity is only 85-87 MPH, because most MLB hitters won’t be fooled by a slider at 83-85 (generally, a slider’s velocity is a few ticks below a fastball). Can Santana be effective as a two-pitch pitcher? Not sure. Mario Soto was pretty good for a while, throwing only a fastball and change-up, but that was when he was humming in the low- to mid-90s. Santana would be relying mostly on guile and competitiveness to get through an MLB lineup. He’s one of the few guys who, I believe, can do that at least once, possibly twice, in one day. But by the third time, the hitters will figure him out. Hey, that’s the case with many MLB starting pitchers — unfortunately, they’re the fourth or fifth starters on non-competitive clubs. Is it worth gambling $5M – $10M on a pitcher whose ceiling is to be a fourth starter?

Alternatively, Santana could be effective as a reliever. Though, that would require him changing his routine significantly, and pitching 45-70 games a year — and often on back-to-back days. Can Santana do that? If so, maybe he has a future as a LOOGY. But again, will it be worth the gamble?

If Santana swallows his pride and accepts, say, a minor-league contract loaded with incentives, then, sure, of course it’s worth it to roll the dice and see what happens. But if he’s looking for anything beyond that — anything guaranteed — then, personally, I would spend the money elsewhere. UNLESS he’s corrected his flaw, in which case, all bets are off. Hopefully we’ll see some video of him throwing soon.

If you’d like to better understand the way the elbow works in the pitching motion, and how injuries to it can be prevented, I highly recommend you purchase Angel Borrelli’s e-book Engineering the Pitching Elbow.

However, I do make a few pennies if you order the below item from Amazon. Those pennies go toward keeping this website going. Any profit realized at the end of the year will go toward a charity to be determined.

Please note, I use this radar gun myself for training purposes. It works pretty well for the cost. Most radar guns cost in excess of $500, and while this one may not be trusted to offer readings identical to the appliances used by scouts, it can be trusted to deliver consistent readings. I would NOT use it to find out a pitcher’s top velocity. Rather, I’d use it to help a pitcher learn to throw a change-up. Whatever his fastball reading is, his change-up should be at least 8-10 MPH slower.