Home » Catching » Buster Posey Aftermath: What Should Be Done?
6

Buster Posey Aftermath: What Should Be Done?

The awful result of a homeplate collision that ended the season of Giants catcher Buster Posey has prompted many to pose questions about the catching position, MLB rules, and Posey’s future. What should change, and what shouldn’t?

Should MLB Change the Rules to Protect Catchers?

There has been some buzz by some suggesting that Major League Baseball should change the rules in some way that would protect catchers from suffering similar injuries in the future. For example, perhaps make it illegal to purposely run into the catcher. From Giants manager Bruce Bochy:

“I do think we need to consider changing the rules there a little bit, because the catcher’s so vulnerable,” Bochy said. “There are so many who have gotten hurt — and not just a little bit. I mean, careers ended or shortened.”

Bochy was a former catcher himself, though I don’t know if he’s drawing this conclusion based on his playing experience or because his superstar player is out for the season. I really, really doubt he — or anyone else — would have reacted with such passion had this happened to, say, Eli Whiteside.

I challenge Bochy to name as many as five MLB catchers in the last 30 years who have had their “careers ended or shortened” as a result of a home plate collision. Personally, I can’t think of one. The catcher who everyone remembers getting clocked and having his “career ruined” is Ray Fosse, who was steamrolled by Pete Rose in an All-Star Game (back when players actually PLAYED All-Star Games, rather than just went through the motions) and as a result, had his shoulder separated. That happened in 1970. Do you know when Fosse played his last MLB season? 1979. In fact, Fosse returned to play two days later, caught another 40 or so games, and earned a Gold Glove while batting .307 for the season. Fosse’s career eventually went downhill after that season, but it had nothing to do with Pete Rose plowing him; Fosse had several other injuries afterward and stopped hitting.

But I digress … should MLB change the rules? Absolutely, positively, NOT. Catchers can (and should) learn to block the plate in such a way that they can both prevent injury and the runner from scoring. In most cases, the runner is the one who is most vulnerable to injury if there is a home-plate collision, because the catcher has equipment protecting himself. And the truth is, there is already a rule protecting the catcher (and all fielders, for that matter) — it is 7.08:

Any runner is out when —
(a) (1) He runs more than three feet away from his baseline to avoid being tagged unless his action is to avoid interference with a fielder fielding a batted ball.

So, as long as the catcher is at least three feet away from the baseline, he can’t be blindsided by an incoming runner. If you can’t see someone coming at you, you are vulnerable. If you can, you can take steps to minimize danger. Is it possible to still get injured, even if you see the runner coming and you have set yourself into a safe position? Of course, but it happens rarely and is part of the game. Which leads us to the next question ..

Could the Injury Have Been Avoided? And/Or, Was Posey Improperly Positioned?

I’ve taken a look at the video replay — which provides several angles — many times, and I still can’t see exactly how Posey injured himself so gruesomely. It was a “bang-bang” play, meaning, ball and runner arrived almost simultaneously, so the collision may have hid the moment that caused the damage. To me, it looks like Posey’s left leg was injured after the impact of the collision, when it rolled underneath the weight of his body. Why did his body move that way so forcefully? Because Posey wasn’t in a strong position to withstand the impact of the runner coming into him. Why wasn’t he in a strong position? Because he caught the ball with his left knee already dropped to the ground, and he pivoted from that knee toward the incoming runner to apply the tag. If you watch the replay, you can see he “didn’t have a leg to stand on”, and by turning his body to make the tag, he had momentum moving that way and nothing to brace himself from the impact of the runner coming into him. Ideally, he catches the ball with both feet firmly planted on the ground, then either steps into a strong position to face the runner head-on — such as an offensive lineman in football might do — or, apply a swipe tag (which is probably safer). Once Posey dropped to his knees, he had no power, strength, foundation — nothing — to keep control of his body, and as a result was completely controlled by the runner / the collision.

Does that mean it’s Buster’s own fault that he broke his leg? Well, yeah, kind of. But I can understand, in the heat of the moment, why he did what he did; he basically was operating on instinct, which told him to get down to stop the ball and turn and apply the tag as quickly as possible. The unfortunate part of this is that his instincts were wrong and dangerous. Could he have had better instincts? Possibly. If a catcher is taught to keep his feet on throws to the plate, and he spends hours and hours of correct repetition to instill that, then maybe the catcher doesn’t do what Posey did in that situation. But it’s really hard to say, because sometimes an athlete has to “improvise” — you just hope that the improvisation still relies on safe technique.

Should Buster Posey Move To Another Position?

I don’t think so, and I hope such a decision isn’t made. Posey’s injury was highly unusual — a freak accident, if you will. Moving him to another position will not necessarily make him less vulnerable to future freak accidents. Outfielders injure themselves running into walls and diving for fly balls; middle infielders get their knees taken out from under them by baserunners; corner infielders can sustain major injuries by falling down dugout steps or going over railings in pursuit of foul pop flies. Hitters can get injured by pitched balls; baserunners get hurt from sliding. The bottom line is this: injuries happen, no matter where you play on the field. It’s part of the game. Do catchers get more knicks, dings, and bruises? Sure. Do they suffer more injuries that prevent them from participating? I’m not so sure; check the disabled list on any given week and note how many catchers are on it — I would guess that there aren’t any more backstops than infielders, outfielders, or pitchers. 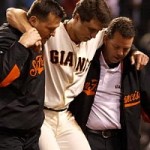 Then there’s the theory that all the bumps and bruises a catcher suffers can affect his hitting. To that, I can attest, is somewhat true. We catchers get sprained and broken fingers, which can hamper a swing. But again, those types of injuries happen to other players as well. Jose Reyes, shortstop for the Mets, for example, frequently has finger injuries that occur as a result of his hard headfirst slides. Additionally, there is the thought that a catcher wears down over the course of a season, and that affects his offense. Well, yet again, that is an issue that happens to other position players as well — it all depends on the conditioning of the player.

Whenever I hear that a team wants to move a catcher out from behind home plate to protect his offensive skills, or “extend his career”, I want to scream the names Johnny Bench, Ted Simmons, Mike Piazza, Carlon Fisk, Thurman Munson, Pudge Rodriguez, Yogi Berra, Gary Carter, Jason Varitek, Lance Parrish, A.J. Pierzynski, Sandy Alomar, Terry Steinbach, Bill Dickey, Roy Campanella, Mickey Cochrane, and dozens of other catchers who had long careers and had success both behind and at the plate.

Personally, I think that if Buster Posey can physically return to catching — and it sounds like that will happen, eventually — then he should. The catching position has become a dark hole in terms of offense, because teams are too quick to move young, good-hitting catchers away from the position to “protect” them. Those same teams then lament that “there are no good-hitting catchers these days”. Gee, I wonder why?

So those are my thoughts. What about yours? Post your opinion on the Buster Posey incident in the comments.