Home » Hitting » Hitting: How To Lose Power in Your Swing
4

Take a look at the video below of Mets minor league prospect Reese Havens, while taking batting practice in the Cape Cod League in the summer of 2007 (courtesy of SaberScouting, who does an excellent job of breaking down his entire swing):

Now take a look at more recent footage of Havens in the Arizona Fall League in November 2009 (courtesy of Toby Hyde of MetsMinorLeagueBlog):

It looks like a pretty nice swing, doesn’t it? Smooth and quick, straight to the ball. I’m a Mets fan and Havens is someone I’m very high on for his old-school approach, leadership skills, and all-around ability as a ballplayer. He’s moving quickly up the ladder but isn’t hitting with as much power as some hoped. So I took a closer look at his swing and called in the eagle eye of Dan Gilligan, a former All-American, pro scout, college coach, and currently a highly respected hitting instructor for the Pro Player Academy in Hawthorne, NJ.

Joe: after watching your videos about striding against the front leg, and keeping the weight back with the hands, it looks to me like this kid would generate more power if he didn’t “leak forward” with the front side and his hands when his front foot lands. Are you seeing what I’m seeing?

Dan: It looks to me like he starts opening that front side a shade too early, and the hands start going forward as his foot lands, rather than staying back in the launch. Because of that, he’s losing some of the power from his hips.

Joe: Frankie Piliere, when commenting on Havens’ Cape Cod video, specifically pointed out : “There is also a huge separation between where his hips come forward against the front leg and his hands, which remain completely back.”

Dan: Piliere does a great job of breaking down the BP swing, but I disagree on the separation. I agree it’s there, but I don’t think it’s necessarily a good thing, because his weight is shifting along with the front leg and his head is moving forward. Though, it’s much more pronounced in the recent video from Arizona.

In the Cape Cod BP session, Havens was for the most part staying back until contact. As Piliere points out, his head doesn’t move much until contact or slightly after — but then it pushes forward and up, and his weight goes over his front side after contact. I generally dont like this in the swing, in fact I dont like any forward movement after the front foot drops, because the hips can’t rotate efficiently while the body is transferring weight. In game conditions — such as we see in the recent AFL video — this action can cause the hitter to rush forward or “race to the ball” which can cut off the power of the hip rotation.

Joe: This is what we call “blowing through the stop sign”, right?

Dan: Yes. Normally you see good hitters drift BACK after contact, because they are rebounding off a firm front leg. However in Havens’ case, he’s drifting over and past the front leg — so he’s “pushing” the ball rather than driving through it. And yes, we call this “running through the stop sign”.

Joe: Actually, after re-reading Piliere’s evaluation, he pretty much says the same thing:

“Havens has a great deal of head movement, more specifically toward the pitcher, than I would prefer. And, if you look closely toward the end of his swing, it comes up. That is a direct result of a lot of the upper body that he uses in hitting the ball. Thereâ€™s lots of shoulder and upper body torque going on there. It may cost him a little power with his upper body drifting at the ball but heâ€™s very good at getting to the ball and making contact simply using his hands.”

Dan: Exactly. In fact, you often see a good hitter’s head move back a little bit, rather than forward, as they brace themselves and rotate the hips.

Joe: Understood. Now what about those hands leaking forward?

Dan: In the Cape Cod video, Havens’ hands do leak just a bit as his top hand starts to “unwind” before launch. In other words his top hand should be a little more turned in towards his head at the launch position — or “cocked”. He is losing whip by unwinding his top hand early. Under the stress of game conditions a hitter may amplify his faults, so maybe this is where his hands break before his front foot drops as we see in the AFL video.

Joe: So are you seeing more of this amplification / loss of whip / hands moving forward too early in the second video from Arizona?

Dan: Absolutely. I call this a “false start”. Meaning, his hands get a head start and are moving forward before the front heel hits the ground. Again, there is no cocking of the wrists to start the swing, so the hands are already “en route” by the time that foot lands. How the heck does he adjust to off-speed pitches like that?

Joe: Beats me. That might be part of his problems so far in pro ball — I haven’t seen enough of him to say for sure.

Dan: There’s something else — he seems to be “jerking” everything. He pulls off the ball so much that in one of his swings (the fly ball to right in the AFL video) his back shoulder finishes a foot higher than his front shoulder — an indication that he’s upper-body dominant, and “muscling the ball” or “muscling up”. This problem is a direct result of the false start we discussed earlier.

An optimum swing displays a loose and relaxed upper half, which promotes whip and bat speed. 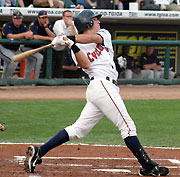 Joe: Do you think these problems are correctable?

Dan: Yes, definitely. For starters, he needs to relax and smooth out the upper body rather than “muscle up”. To correct the false start and leaking forward issue, he needs to keep his front side on the pitch longer. Instead of everything going to the ball at once, he needs to keep the hands back when the front foot comes down.

Joe: Let’s hope he gets this issue fixed — I want to see Reese mashing in Flushing some day soon!

You can learn more about hitting from Dan at DanGilliganHitting.com

Back What Do Baseball Scouts Look For?
Next Ron Swoboda on Outfield Play