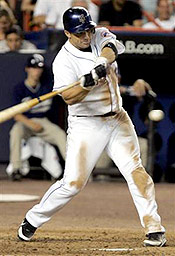 While it’s very possible that a batter’s mechanics may need some tweaking, before you go spending money on a magic elixir, try a different approach: getting deep.

Deep means two things to a hitter, and all the GREAT hitters do it. First, it means let the ball get deep. In other words, let the ball get as close to the catcher as possible before committing to your swing. Second, it means get into deep counts — such as 2-1, 3-0, 3-1, even 3-2. Learning to do these two things alone will put you in a better position to hit balls with authority — also known as, getting your pitch to hit.

Let the Ball Get Deep

The longer you wait on a pitch, the better look you get at it. While it’s true that the most direct route in hitting a homerun is to hit a ball far out in front of the plate, and pull the ball to the shortest part of the outfield fence, using that kind of strategy all the time will result in far more swings and misses, and weak grounders, than fly balls over the fence. Those kind of hitters may help the team once in a while, but overall are not very productive. Dave Kingman was one of the last “dinosaurs” who hit this way — a typical season for him was 35 homeruns and a .205 batting average. If he didn’t hit a homer, he wasn’t much use to his team.

A better approach is to let the ball get deeper, allow it to come right into your “kitchen”. Trust your hands — they’re much faster than you think — and learn to get the meat of the bat (or “sweet spot”) on the ball. It’s easier than it sounds, and requires you to learn when to throw the bat head out early (on inside pitches), and when to wait a fraction of a second longer before dropping the bat head (on outside pitches). You will hit a pitch on the inside corner out in front of the plate, and meet an outside pitch when it is on top of the plate — or even past it, depending on where you stand in the batter’s box. 90% of inexperienced hitters have no trouble hitting the ball too early, but only the best hitters are able to trust their hands and wait on those outside pitches.

There is an old school fallacy that says hitting with power to the opposite field is more difficult because it requires great strength. In fact, that’s not entirely true; if you have strength to correctly pull the ball with power, you have the strength to do the same the other way. The fallacy is based on two premises: 1. that your weight goes with the swing (out in front), so that you’re actually lunging into the ball; and 2. that your swing has more length, and therefore more momentum, when it meets the ball out in front. In the first premise, a batter gets into that predicament by being fooled on an offspeed pitch — all his weight is on his front foot, but the timing is just right to get the weight into the ball and power it over the nearest fence. In other words, more luck than skill is involved.

Another benefit of letting the ball get deep is that you get a full, long look at the action of the pitch. All pitchers worth their salt put some kind of movement on the ball (intentionally or not). In addition, few pitchers can get the ball to move more than 3-5 ways consistently. For example, a pitcher may have a fastball that tails in and down a bit, a changeup that falls away, and a curve that starts high and drops down. The longer look you get at these pitches, and their late movement or action, the better chance you have of figuring out when and where to meet the pitch with the sweet spot of your bat. A good strategy is to think this: if the pitch is middle-out, go to the opposite field. This gives you that extra fraction of a second to wait on a pitch, let the ball get deep, and then when you’ve decided to commit, throw the hands through the hitting zone. To see this approach in action, pay attention to MLB hitters Albert Pujols, David Wright, David Ortiz, Manny Ramirez, Mike Piazza, Ryan Howard, and (usually) Carlos Delgado. All these men do a great job of letting the ball get deep, and regularly hit balls over the opposite-field fence. They also hit for high averages.

Get Into Deep Counts

Letting the ball get deep goes hand-in-hand with getting into deep counts. When you regularly wait longer on pitches, and get good looks, you tend to swing at less pitches. Because you give yourself more time before committing, you can more easily identify balls and pitches that are difficult to handle, and you let them go. While the very best pitchers will challenge hitters early in the count with strikes, most of ordinary hurlers nitpick around the zone, and try to get hitters to swing at bad pitches (it helps to study a pitcher and find out early in a game whether you’re dealing with an aggressive pitcher or a nitpicker). If you’re up against an average pitcher, and you take pitches, you’ll often find yourself in good hitting counts, such as 2-0, 2-1, 3-0, 3-1, and 3-2 (that’s right, full count is good for hitters because the pitcher has to throw a strike to get you out). When you’re ahead in the count, especially 2-0, 3-1, and 3-0, you have the advantage of looking for a pitch that you can not only handle but drive. Half of power hitting is technique, the other half is getting and swatting YOUR pitch. In addition, by getting into deep counts you are accomplishing two more things: first, you’re wearing out the pitcher; and second, you’re seeing more of his pitches. Knowledge is power, and the more you know about what a pitcher throws in certain situations, and how his pitches move, the better prepared you are to hit. As you see more and more of a hurler’s pitches, the easier it will be for you to recognize which ones you can best handle, and anticipate when they’re coming.

So, before you go wasting money or tweaking your hitting mechanics, learn to get deep. If you still can’t go deep when getting deep, THEN consider mechanical adjustments. You will lose nothing by learning the approach of great hitting, and gain dramatically when/if you do fix your mechanics.