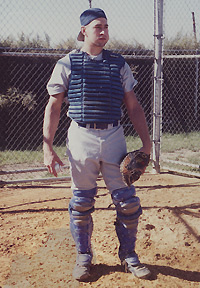 My name is Joe Janish and I have been playing baseball for over 30 years. I played for Saint Peter’s College, an NCAA Division I program that competes in the Metro Atlantic Athletic Conference (MAAC). During my time there I caught over 95% of the innings played and had a career batting average of .350 as a 4-year starting catcher and team captain. In my senior season I finished in the top 15 in the nation in hitting with a .418 average and was named to the ABCA All-American, Northeast Region team. In addition, I was one of just 12 players in the country selected to participate in the YES (Youth Education through Sports) clinic held during the 1992 College World Series in Omaha, Nebraska.

A severe ankle injury hampered my attempts to go pro, so I served as pitching coach for St. Peter’s for a few years. During my stint as coach, a number of players under my tutelage signed pro contracts, and in my final season of coaching, the program enjoyed its most successful season, winning the MAAC championship and advancing to the Eastern Regional finals, just one step away from the College World Series.

After college I played in several semipro baseball leagues in the NY/NJ area, the most significant being the “old” NJ Met League. There I had the pleasure of catching the man who inspired my writing: former Yankee great and Ball Four author Jim Bouton.

Somehow, I’m still playing hardball, and still learning about the game. I get as much a kick out of teaching a young pitcher how to throw a sinking fastball as I do knocking one over the fence. My goal with this site is to give back to the game, by offering the insight and techniques I’ve learned over the years, to other players young and old.

If you aren’t yet bored to tears, you can read more about me according to other people here, here, and here.

In addition to playing, I also offer private and group lessons to serious players of all ages in the NY-Metro area — my specialty is in training pitchers and catchers. During the winter months, indoor sessions are held at the Academy of Pro Players in Hawthorne, NJ (also the headquarters for Akadema, a top-notch baseball equipment company founded by one of my best friends and teammates growing up, Lar Gilligan). In warm weather, lessons can occur almost anywhere there’s something resembling a baseball diamond. Email me at joe at onbaseball.com for more information.